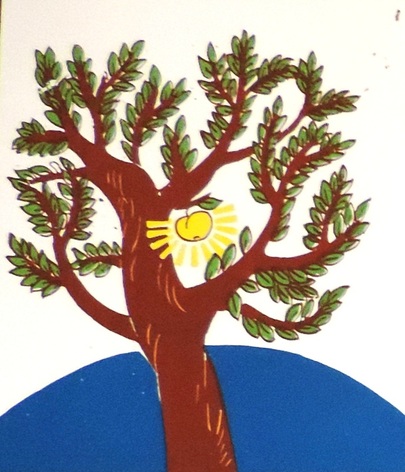 The Three Brothers and the Golden Apple
Once upon a time there was a poor woman who lived with her three sons. They were very poor. The only thing they had was a wonderful apple tree that grew in their little garden.
Every year, it gave a single fruit – an apple of real gold. However, the family could never pick up the apple because each year a dragon came along and stole it.
The sons got very angry and decided to fight off the dragon.
First, the eldest son asked his mother for a knife and a bag of walnuts and went to guard the apple tree.
Although it was dark at night the young man lay by the tree and waited.
As the hours passed he soon  fell asleep. When he woke up, the apple wasn`t in the tree and he went home ashamed.
The next year the tree had a new golden apple. The second son decided to guard the apple. He asked for a knife and a bag of nuts, too. This time he climbed the tree and waited for the dragon there.
Unfortunately, he also fell asleep and when he woke up, he saw the gold apple had was again. 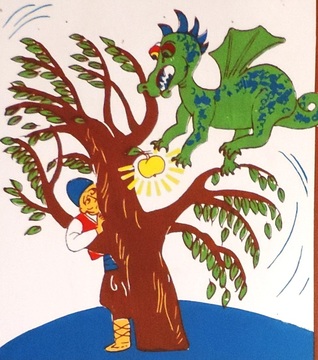 The following year the third son said, “Mother, give me the knife to guard the apple".  She agreed although he was too young to fight the dragon of which everybody was afraid. But the youngest son was brave, he climbed up the tree and waited for the monster.
This time the boy decided to make a shallow cut into his arm. The pain cleared his mind and he didn`t fall asleep. When the dragon came into their yard, he immediately saw it,stabbed its  neck with his knife and wounded it badly.
Hurt and confused, the dragon roared but managed to run away. Then, the youngest brother quickly grabbed the apple and took it to his mother. All were very happy.
However, the dragon was still alive. The youngest son urged his brothers to go and look for it and kill it while it was still weak. They agreed and the very day the three brothers were off, determined to destroy the monster. 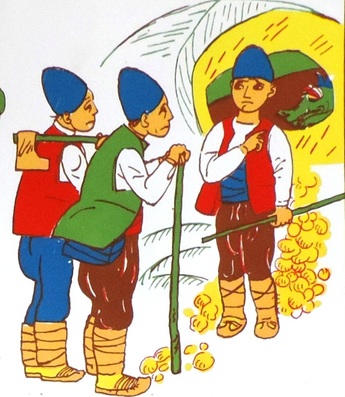 They walked and walked. Finally, they found a big hole in the ground.
"I will look for the dragon.” said the eldest brother.
The brothers tied a rope around him and lowered him in the hole. The hole was deep and dark. As soon as the man was halfway down, he got scared so the brothers pulled him back out.
“Let me try,” said the second brother. When strange creaks and sounds echoed from the darkness and frightened him, he shook the rope and was also pulled up.
“I will go,” said the third brother. He was brave and strong.
No sooner had he reached the ground than he quickly untied the rope from himself and began exploring the cave, looking for the wounded dragon.
Soon he found a house and peeked through the window.
Inside, three beautiful girls with golden hair played a ball. Two of them had golden apples. The youngest one had no apple, but played with a golden mouse. 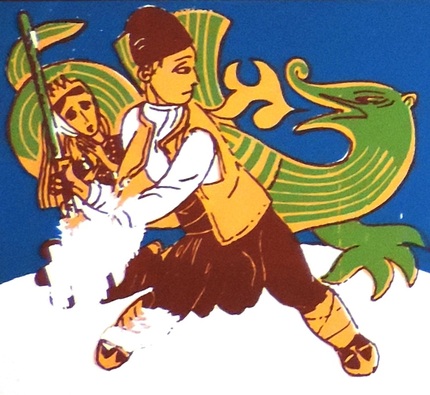 “Please  let me in, young ladies” whispered the youngest son.
“Go away, stranger. Each year on this day, the Dragon comes back with a golden apple for one of us. This year, it returned sick and without an apple. If you come in, it will eat you up”
“I am not afraid of it,” insisted the boy.
They let him in. He killed the dragon and saved the three beautiful sisters. They all left the house with the brave boy.
The other brothers pulled out two of the sisters but the youngest sister was so pretty that the third son was afraid to let her go up. He knew that his brothers would leave him down and fight for the beauty.
When the rope fell down for the third time, he tied the princess up.
“Here,” she said, “Take this ring. If your brothers fight for me, I will tell them that I will choose the one who can give me self-made clothes. As for you, if your brothers do not pull you up, you will soon fall deeper. There are two bulls down there  – one white, one black. If you fall on the white one, it will take you up to the world above. If you happen to fall on the black one, however, it will take you to the worlds below.”
The rope did not fall again.
Suddenly, the earth began to shake and the youngest brother found himself on the black bull.
The black bull ran through many lands, through nine whole worlds, through nine kingdoms into the tenth. There the bull disappeared.
The youngest brother came upon an old house.
He talked to an old woman and realized that a dragon had stolen the water in the kingdom and taken one girl every year to let them have some water from time to time.
Now it was the king`s turn to send his daughter to the dragon.
The boy got furious, he found the beast which was terrifying with  three heads and a huge body. No matter how difficult it was,  the young man was able to kill it.
Before that he had asked the king a favour - to help him find the way back home. As the king was happy, he kept his promise and helped the courageous boy. 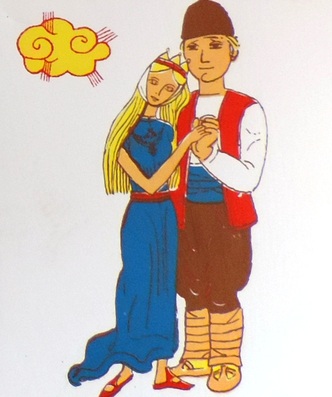 It turned out that the elder brothers were still fighting for the third beautiful sister. The youngest brother immediately took out the ring the beauty had previously given him.
“Here, I am giving this to you.”
As he handed her the ring, it suddenly broke into two and from within it three dresses fell out, each one more beautiful than the others. The young lady smiled.
“You have given me clothes that are self-made by,” she said, and “I am yours, as I promised.”
The youngest brother married the beautiful young lady and they lived happily ever after.

Travel Brochure for Bulgaria
made by 7th grade students 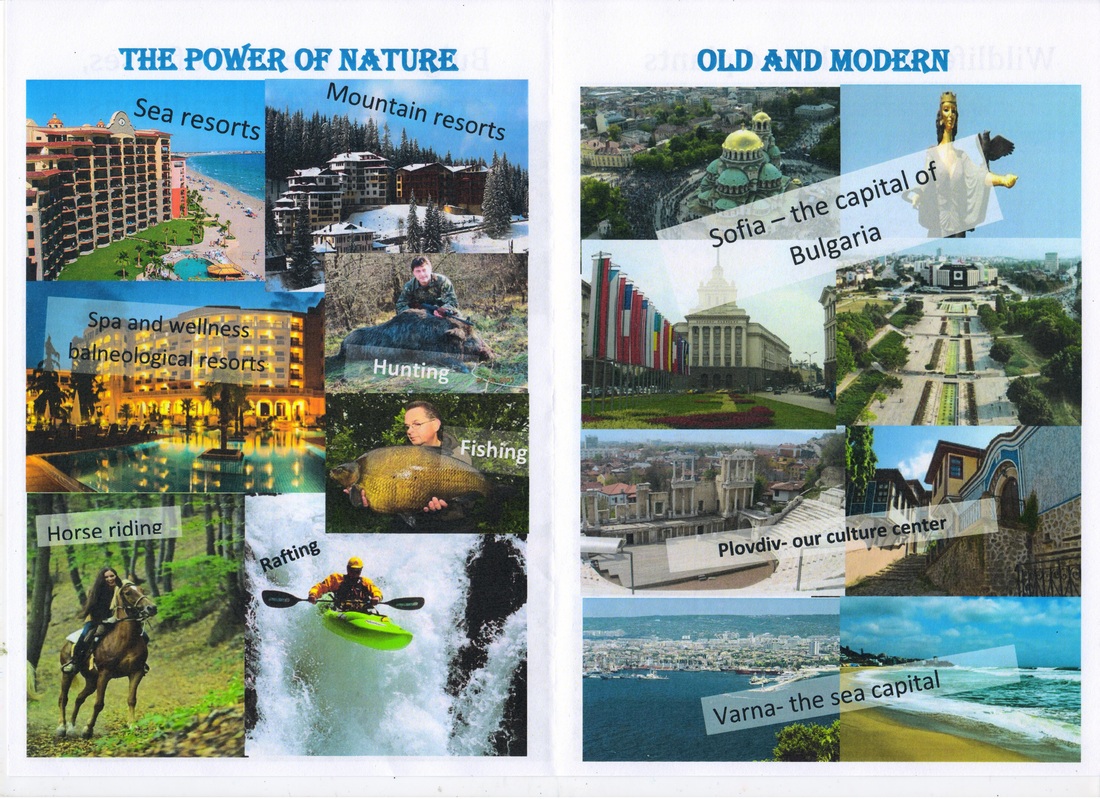 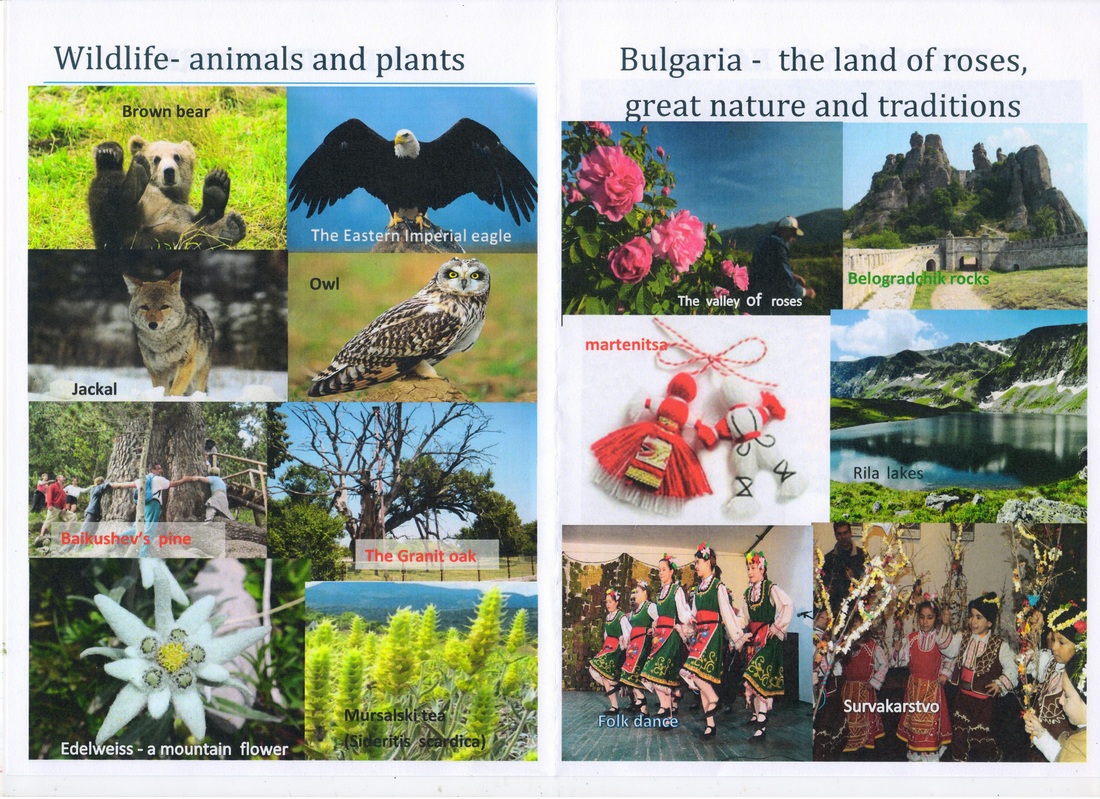 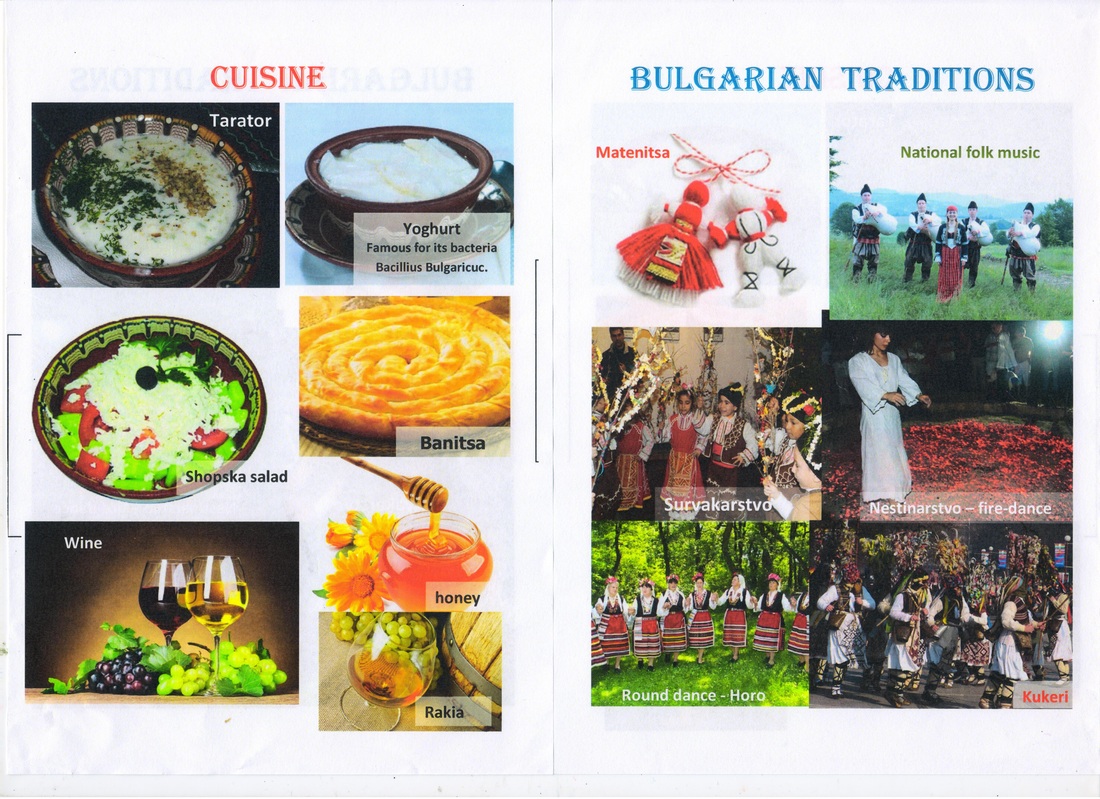 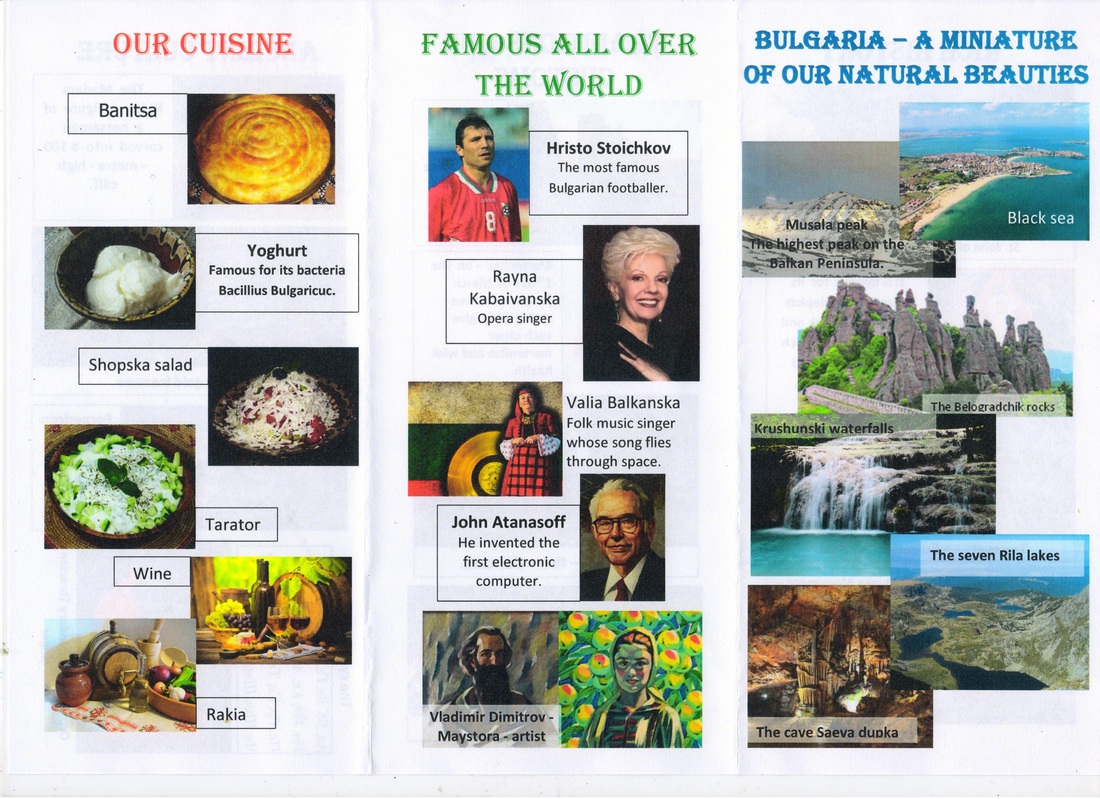 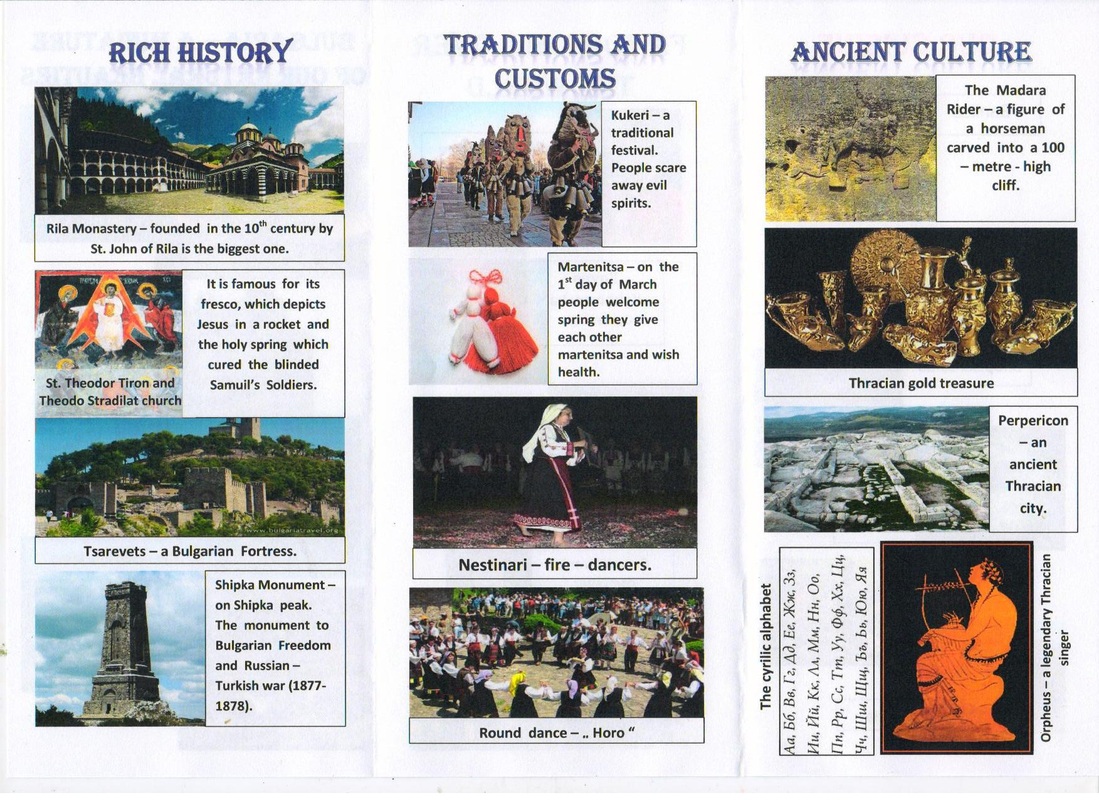 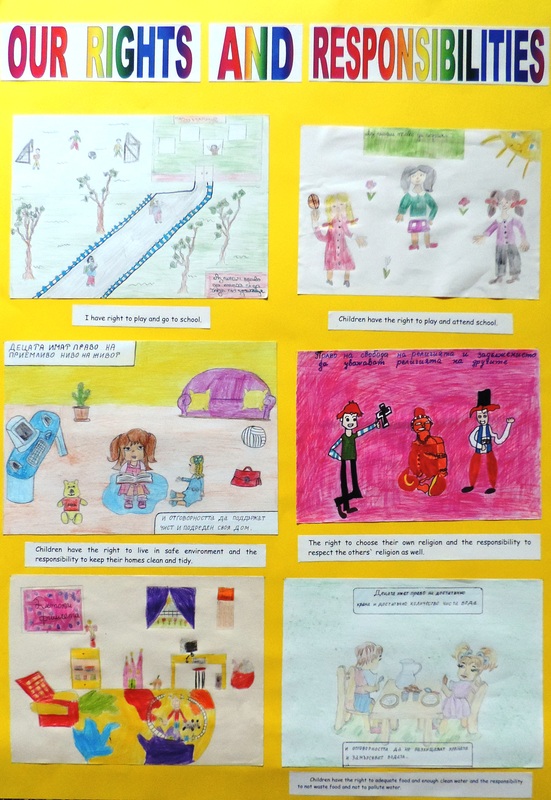 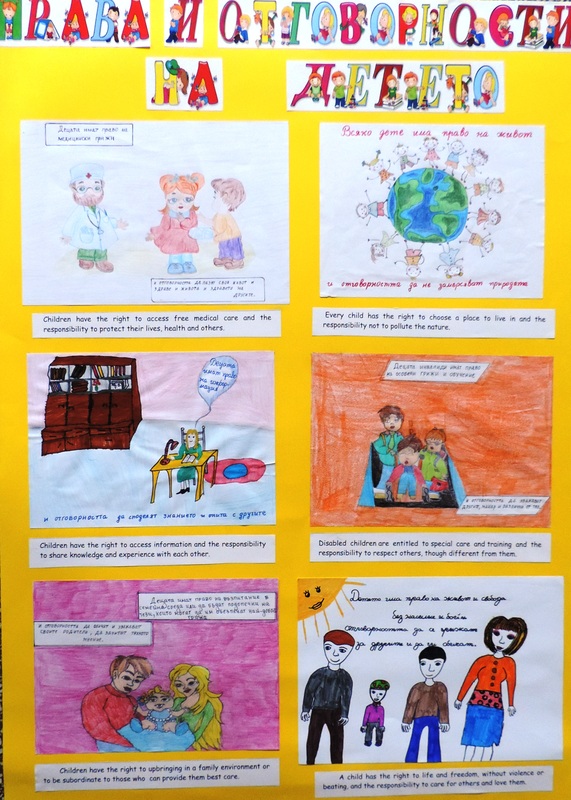 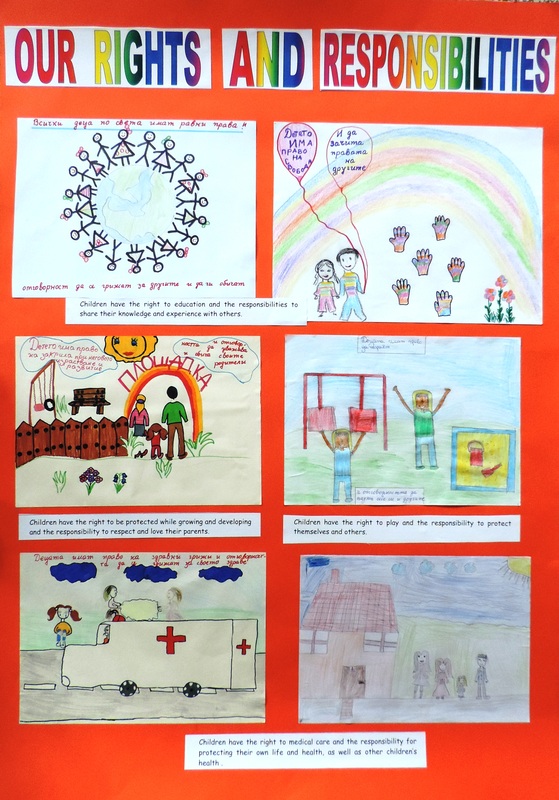 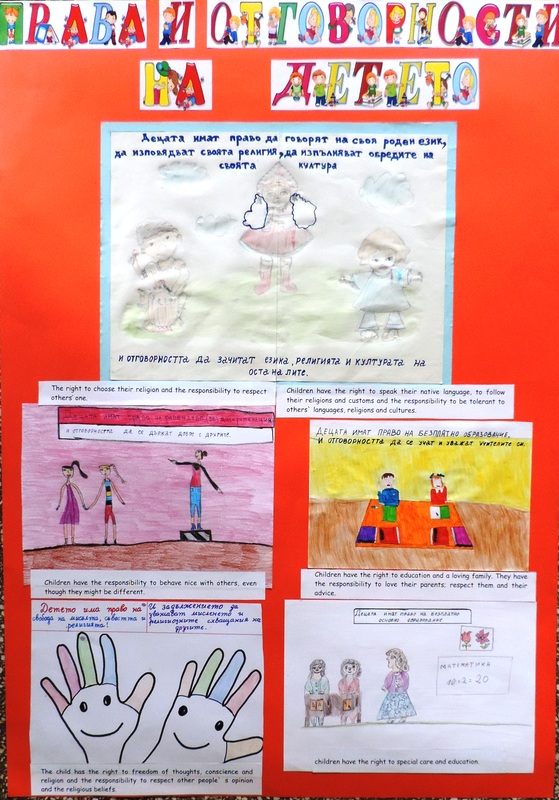 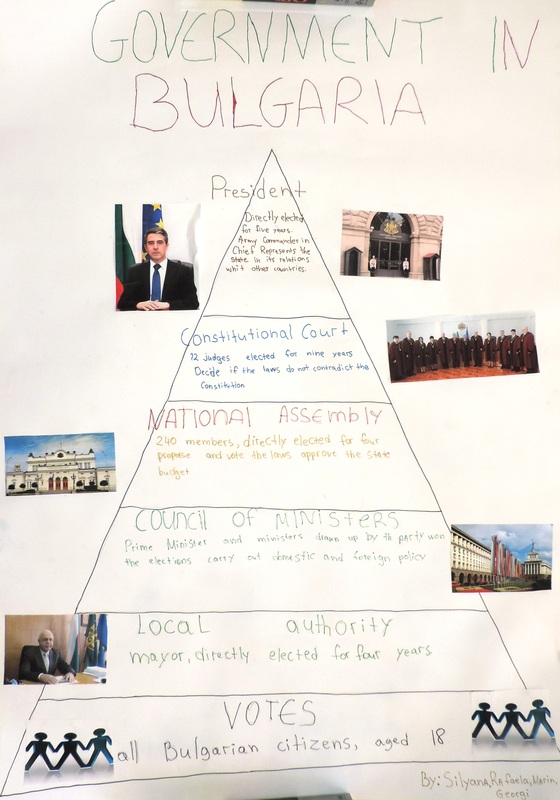 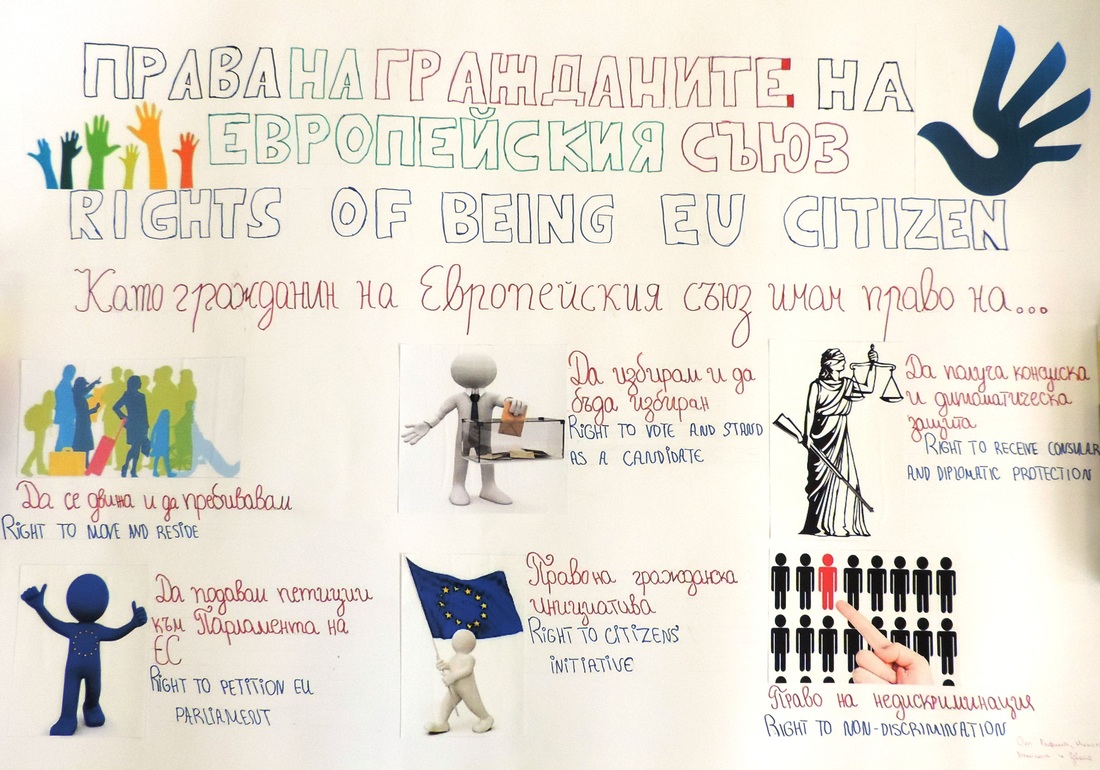 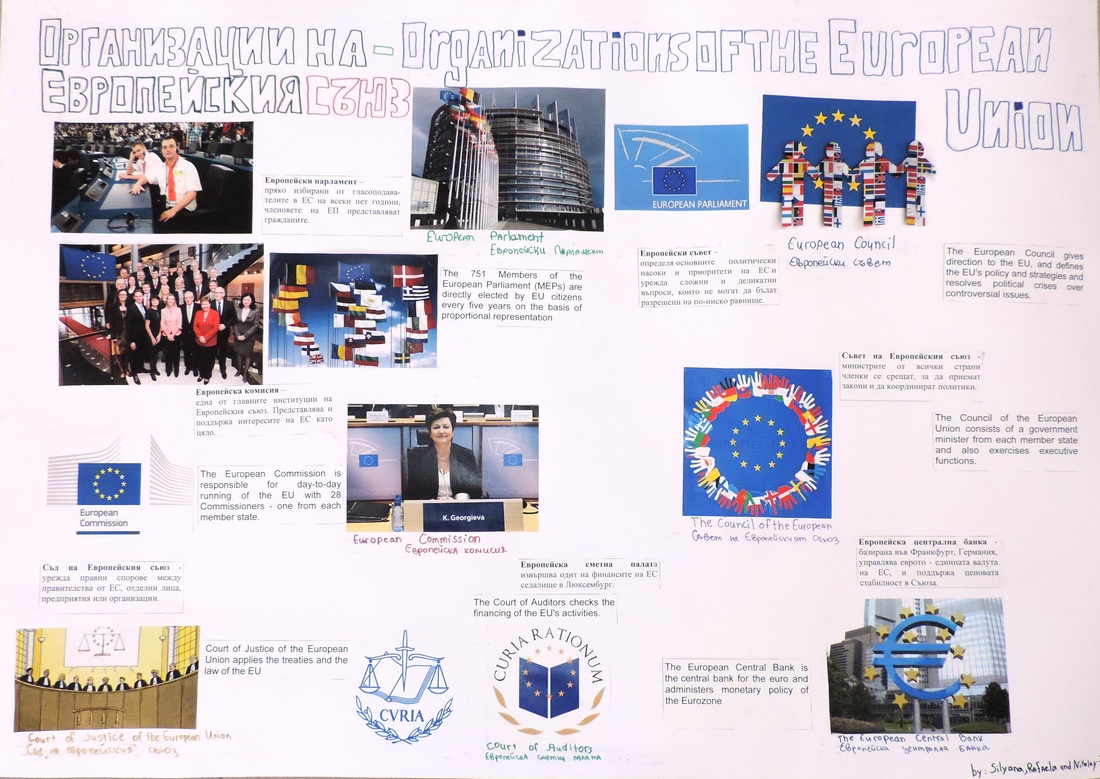