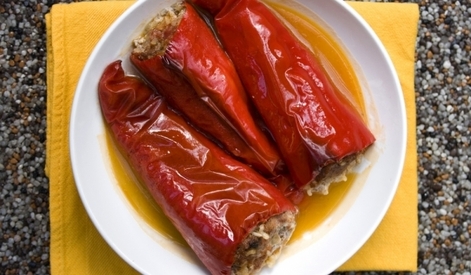 Stuffed Peppers
Ingredients:
1 kg minced meat
1 big onion, chopped
2 garlic cloves, minced
10 large peppers - nearly 1 kg
7 Tbsp sunflower oil
1/2 cup rice
300 g tomatoes, grated
1 cup of water/ broth
1/2 Tbsp freshly ground black pepper
1/2 Tbsp ground cumin
Salt to taste
Preparation:
Preheat oven to 180°C
Wash peppers, cut upper parts and remove seeds. Reserve tops.
Heat oil in a large skillet on medium heat until hot and add chopped onion. Sauté until tender and add garlic. Cook for additional 2-3 minutes and stir in the minced meat, cumin and pepper. Fry mince for 5 minutes until it changes its colour, breaking up any lumps with a spoon. Add rice to the mixture, sauté for 1-2 minutes and add the grated tomatoes and a cup of water/ broth. Let simmer for 10-15 minutes until rice absorbs most of the liquid. Allow to cool for 10 minutes and start with the stuffing.
Stuff your peppers with a spoon, but do not compact them too hard. Put a top on every pepper. Arrange peppers on a baking tray, spoon some a little oil over each one, pour half cup of water and add the stuffing mixture, if remained.
Bake for 1 hour, basting occasionally until peppers change their colours to golden brown.
Serve warm and optionally with a spoon of yogurt and some slices of bread. 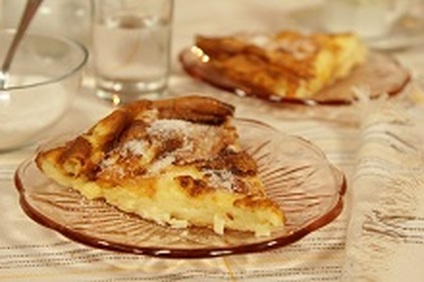 ﻿Mlechnik﻿
Ingredients:
1 liter milk
4 eggs
4-5 Tbsp flour
A pinch of salt
Powdered sugar for decoration
Preparation:
Beat the eggs and add the milk and flour – stir and pour the mixture in a buttered baking tray.
Bake for 30-40 minutes at moderate temperature. Allow to cool for a while and decorate with powdered sugar. 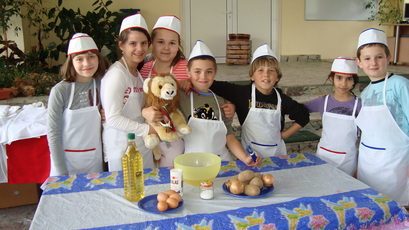 Spanish Omelette /Tortilla De Patata/
The third grade pupils from “Hristo Yassenov” school cooked Spanish omelette putting a lot of effort and enthusiasm into it.
Our Spanish partners from Zaragoza sent us the recipe. We used potatoes, eggs, olive oil, an onion, a little salt and plenty of good humour. While cooking, we coloured the map of Spain, learned more about this country, its traditions and about Don Quixote. The dish smelt all around the kitchen and tickled our appetite. The final result was absolutely delicious. Everyone wanted to have a bigger piece. Not a single bit did remain on the plate. As Bulgarians say, we licked our fingers. We just loved it! 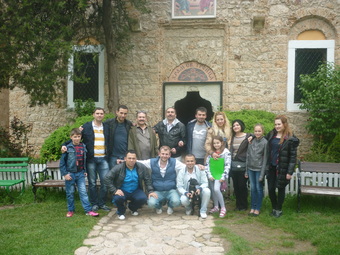 Mobility visit of our partners from Turkey, 7-9 May, 2014
Twelve teachers from Zübeyde Hanim Īlköğretīm, Istanbul, Turkey were on a visit to our school from 7-9 May 2014. The mobility was part of the Comenius 2013-2015 school partnership „Our Diverse Places in a Cohesive Europe”. The boys and girls from our school had prepared  a short musical programme to welcome the visitors, who were impressed with the dancing and singing skills of our talented students. The guests were able to go around “Hristo Yassenov” School, to learn more about education in Bulgaria, to attend classes of Bulgarian language, English language, Social studies and Home economics. The guides from sixth grade took the teachers from Turkey around Etropole, told them about the town’s history and present, and showed them the most important sights. The guests were also able to visit Etropole “St. Trinity” monastery and to admire the magnificent countryside.
We believe that such meetings are very useful and beneficial for both teachers and students. 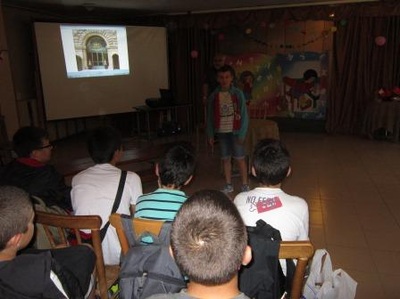 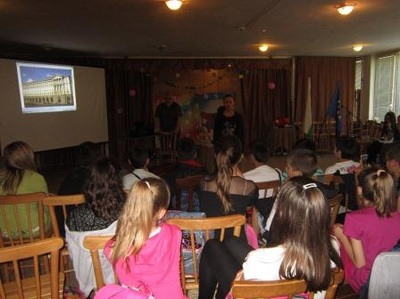 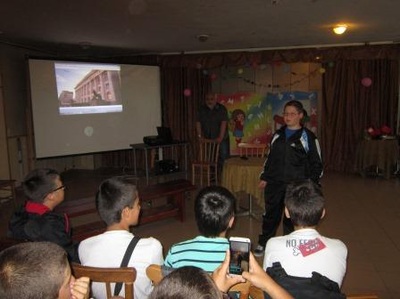 The videoconference with their Spanish friends
On 3rd June 2014 the students from 5a and 5v class in our school participated in a videoconference with their Spanish friends. Thus, they enriched their knowledge about their partners and now they are expecting impatiently their future exciting meetings.
Fourth grade pupils in the kitchen again
This time we cooked a tasty Hungarian dish, the recipe of which we received from our partners in “Vajda Petar” School in Budapest.
We sliced the smoked bacon, then we stewed it in some lard and added finely chopped onions. We peeled the potatoes, cut them into small cubes and added them together with two spoonfuls of paprika to the already done onions. After pouring some water to top the potatoes, we left the dish to simmer. In twenty minutes we added the pieces of smoked sausage. For the following ten minutes we enjoyed the wonderful cooking aroma. Later we were able to find out  that the dish not only smelt good but it tasted very delicious as well.